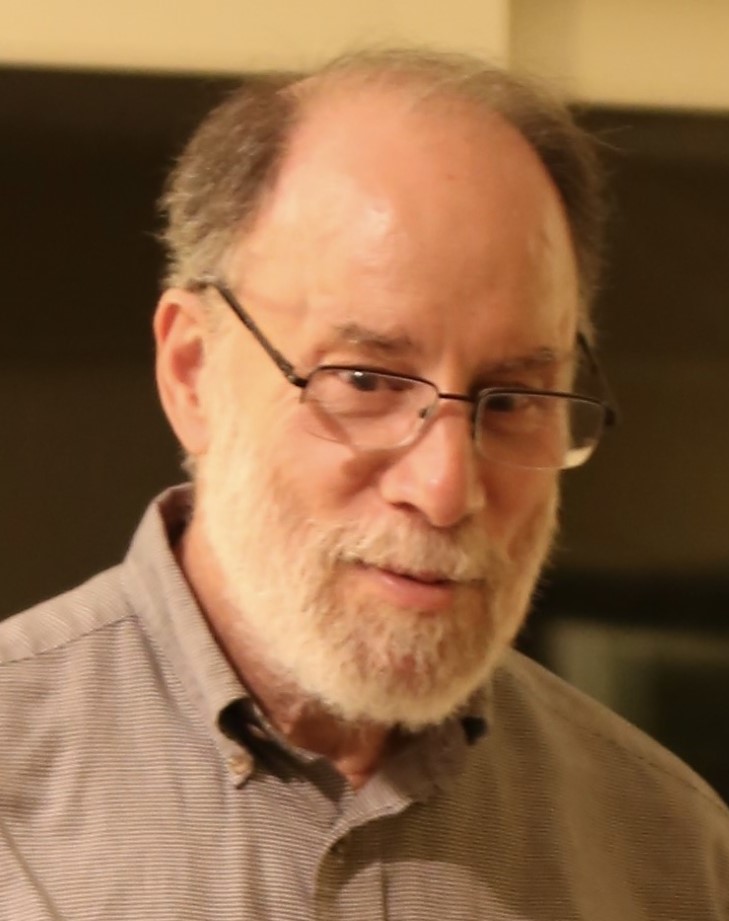 Bruce was born in Kansas City, Kansas, the son of Herbert and Lorraine, and spent his childhood in Omaha, Nebraska. He attended the University of Kansas, wrapping up his college degrees with a Ph.D in Special Education Administration. His career began in Lawrence as a School Psychologist, continued in Blue Valley as Executive Director of Student services, followed by a position in Topeka as the State Director of Special Education, and he returned to and retired from the Lawrence school district as the Deputy Superintendent.

Bruce taught numerous graduate courses for KU and served on a multitude of state and national boards. His passion for special education was evident in his life-long commitment to students and families and was instrumental in changing the focus of special education across the state.

Those who knew Bruce would be hard pressed to recall a memory of him that doesn’t include laughter, a KU sweatshirt, a cold beer in hand, and music in the background. He could tell you the name of every song/artist and was always singing along. Bruce never forgot a face or a name and loved nothing more than talking with people. He was incredibly open-minded and interested in politics and current events. His non-professional resume includes soccer coach, tennis partner, avid yet unsuccessful Minnesota fisherman, dedicated SNL viewer, and basketball fan. His granddaughters loved baking for him and he raved about everything they made. In return, Grandpa always kept a secret stash of gummy bears or Twizzlers for the girls. His highlight of the week was Sunday family dinners.

Bruce is survived by his wife of 52 years, Michele, of the home; his son, Travis Passman of Lawrence; his daughter Erin Passman Lawrence, her husband John, and their daughters Abby, Elise, and Anna, all of Lawrence; his mother Lorraine of Overland Park; his brothers Neal of Tampa, FL and Randy of Raleigh, NC.

The family wishes to thank Bridge Haven for the compassionate care he received in the last year of his 17-year battle with Parkinson’s Disease. In lieu of flowers, the family suggests donations to the Parkinson’s Foundation through Rumsey-Yost Funeral Home, 601 Indiana Street, Lawrence, Kansas 66044.

A Celebration of Bruce’s Life will be held at a later date.

Bruce will be missed. His kindness and curiosity for living
are indicative of of his many gifts.
We came to the Blue Valley schools the same year. When we retired to Lawrence twelve years ago, we resumed our friendship, often working out at the local health club.
Bruce always was a voice of passion for kids and quality education. What a legacy!!!

Bruce always put the welfare of children first. He had a positive impact on so many educators both by word and example. I felt privileged to call him a friend. Wicked smart, funny as hell, humble and caring!

I am saddened to read of Bruce’s death. I was so lucky to has him as my mentor as I trained as a school psychologist and later as a friend and colleague as a special education administrator. He was so bright, articulate, witty and fun while dedicated to the profession. I am so very sorry for your family’s loss, Michele.

How very blessed I was to have Bruce as my mentor/sage/wise guide( and guy!) in BV. He was one of my life’s greatest teachers and a huge part of my growth as an individual.
I told him that the last time I saw him many years ago. I hope he heard it and took it into his big heart.
I smile when I think of him, always when watching his Jayhawks, and often when a fond memory arises.
Sending healing love to all of you. Feel proud-that man was a true gift to this world and will be mightily missed! Thank you for sharing him with us.

I first met Bruce while teaching at Seaman. Over the years I grew to respect him. He was fun kind, intelligent and witty. He deeply cared about special education services and changing lives. I miss him already.

I’m really saddened to hear of Bruce’s death. I am honored to have worked with him. He was an extraordinary man as his life was of service, love, compassion and excellence. May he rest in peace.

Bruce was a dear friend of mine. I’m honored to have known him. We worked together for many years in administration at the Lawrence Public Schools. Bruce was a gentleman, a deep thinker, excellent administrator and mentor to many. He was passionate about Special Education and shared his vast knowledge with many students and staff over the years. He absolutely adored his twin granddaughters and shared many stories about them. Bruce had a fondness for the lakes of Minnesota. He vacationed there often and had some humorous fishing stories he would always share.
Sending thoughts and prayers to Michele, Travis, Erin and the twins.
Rest tranquilly on that Minnesota lake my friend. You will be missed.
Rick Gammill

I can attest to the fact that Bruce greatly benefited the Lawrence School District and its students and patrons. He was a wise man of high moral character. I’m sure he will be greatly missed by his family and all those who knew him. I extend all my condolences to his family.

Michelle and family, my deepest sympathy. I have been a close friend of Lori’s , and Herbs, for many years.A beautiful obituary and I know you were and are a very close loving family. Cherish your loving memories.

So sorry for your loss, Passman and Lawrence families! Thinking of you all and grateful for the memories I have of Bruce’s care, wit and laughter.

I am sorry to hear about Bruce’s passing. He was a school psychologist when I first started teaching and was well respected. We all thought so highly of him.

My condolences to the family. I am saddened to hear this news. Bruce was a joy to work with while he was at USD 497. A special person.

I am grateful to have worked with Bruce in Lawrence Public Schools and to have been inspired by his kindness, good humor, and compassion. My thoughts and prayers are with your lovely family.

I was lucky to have known Bruce while working at the ESDC. A true gentleman in many ways. May God wrap his arms around his family at this time.

From Steve and Mary Grant...

I first met Bruce when I was teaching at Pinckney and he was the school psychologist. That marked the beginning a long friendship that mostly involved slow pitch softball and Sunday afternoon basketball games at Pinckney and West Junior High. Fond memories for sure. Mary and I will certainly cherish lots of memories and Bruce’s sense of humor and all that he did for the Lawrence school system. He will be missed. Our sympathy goes out to Michele, Travis, and Erin. Bless you.

I was so sorry to hear that Bruce had passed. He inspired me to reach for higher goals in my life including getting my doctorate degree. I learned a lot from him about special education and how to deal with people. He will be missed by all whose life he touched. Rest In Peace Bruce.

From Randy and Marcia Weseman...

Michele, Erin, and Travis,
We are deeply saddened to receive this news. Randy cherished Bruce as a dear friend, as well as, a colleague. They started every conversation with each other bragging about their kids and grandkids. In addition to the beautiful family you created together, Bruce’s legacy includes the work he did for children across the state and nation who sometimes didn’t have advocates. Bruce may not have known their names, but he fought to make their lives better. Whenever we see your beautiful and talented granddaughters, we see Bruce. Bruce was a brilliant man who was a great conversationalist, had a delightful dry sense of humor, and, above all, stayed true to his beliefs and acted on them. The world is a better because Bruce was here. We wish you increasing peace as you continue to navigate the void in your lives created by his long illness and passing. Much love, Randy and Marcia Weseman

I am so sorry for your loss. Bruce was so special to me as I’m sure he was to all Blue Valley Special Educators. I respected him, learned so much from him, and enjoyed his fun personality. When he hired me, he helped me get back on my feet as an SLP after the loss on my son. He will be missed by many.

Bruce was one of the brightest and most compassionate people I have ever known. He was very student-centered and advocated for all students. Bruce made a huge difference in many lives, mine included. I will always think of him as such a staunch supporter of what was right and he was always willing to fight for what mattered. He will be truly missed.

Bruce will always be remembered by me by his kindness and never ending smile and support. We love you Bruce and we love you Passman family.

I am very sorry for your loss. I first knew Bruce as a parent of a child with a learning disability, then later he hired me as a special education teacher in Blue Valley. His support was unwavering and I learned so much from him. Prayers and sympathy for your family.

Bruce was one of the best advocates for special education I have ever known. He mentored me in late 70’s (LPS) and our paths recrossed in the 90’s ( LPS); Bruce always had a twinkle in his eye and a smile on his face. I pray for his family and thank them for sharing Bruce with me and my sped cohorts for so many years. Peace be with you.

Bruce was a friend and a great guy. Condolences to his family for their loss.

I am so sorry to hear of Dr. Passman’s passing. He left a lasting impression on me as a professor and mentor in special education leadership. I’m forever thankful he gave me the opportunity to complete my internship with his staff. Please accept my heartfelt condolences for your loss.

I am sorry to hear of your loss. Bruce gave me my first opportunity to work with students. He touched the lives of so many special needs students. I am grateful for the opportunity.

Michele, so very sorry to hear of Bruce’s passing. Always enjoyed visiting with you at Hy-Vee. Our prayers and deepest sympathies to you and your family.