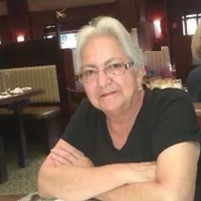 For over 30 years of her working career, she was an office manager for K-Mart, retiring from the company in 2012.

Beth married Gary Dean Kellison on December 22nd, 1961. They began their marriage while Gary served in the US Army, stationed in various locations in Germany and around the U.S. Gary preceded her in death in 2005.

Beth was everyone’s friend, a beloved mother, wife, sister, grandmother, and great-grandmother. The world was a better place with Beth in it. Her kindness, love, and ferocious loyalty will be greatly missed.

The family suggests, in lieu of flowers, that contributions be made to The Wounded Warrior Project at https://support.woundedwarriorproject.org/donate.

Beth- will truly be missed. From the first time I met her she was so kind and made me feel comfortable. It was so easy to open up to her, you could feel she really cared about you.
Rich and I are so sorry for your loss. Heaven gained a beautiful Angel.

My thoughts and prayers to the family. Brian and Gary she will be missed. May you all be blessed.

Brian & Family, sorry to here about your mom’s passing. I know its difficult. Worked with you and your dad and met your mom. May you all find peace with our Lord during this difficult time and with my thoughts and prayers. Dennis S.

Brian, Gary, Jimmy and all you families. Really sad to hear about Ma Kellison. Thinking of you all!
Rusty & Sheila

Brian and Cheryl, our thoughts and prayers are with you guys.

So sorry for the loss of your mom. She was such a great friend to me. Will miss are daily talks. Also going to perkins. Your mom was a remarkable woman. Rest in peace dear friend.

From Jerry & Joyce Cromwell and Boys...

So sorry for your loss! Thoughts and prayers to your entire family!

I always enjoyed Beth, she was so cheerful and caring. So sorry to loose a great friend.

From Emmett and Kathie Stovall...

We will miss her dearly. When we think of tomatoes and nice neighbors we will remember Beth and Gary.

Brian, Gary and Jim, Our family so very sorry to hear the news of your mom’s passing. Beth being one of the most kind, sincere, thoughtful, caring woman that I have been so very blessed to have known for 46 years. I read these words not long ago, could have been written about your mom. “I love people that have no idea how wonderful they are and just wander around making the world a better place!” That was Beth! She will be missed! Carma and Fred and family!