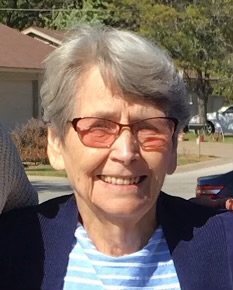 Helen was born on January 7, 1932, to Thomas McCall and Waneta McCall Deskins in Lawrence Kansas. She married Albert E. Hess. They celebrated 72 years of marriage on June 25, 2021. He survives of the home.

Helen was a devoted wife and loving mother. She was the matriarch of the family and passed along her wisdom when asked. Helen was a devout Christian who spent her life living what she believed. She was a member and fellowshipped at First Church of the Nazarene. Helen worked at Hallmark Cards located in Lawrence, Kansas for 22 years in many different departments. She then worked at Dillons and Weaver’s after retirement.

Helen was quick to laugh and hug. She was patient and generous. She found great joy in her family, especially her children, grandchildren and great-grand-children. Helen loved to quilt and created several works of pure art over the years. If you were lucky you would open up one of these treasures as a gift. Helen was a woman of great faith and strength.

She will be missed and thought of often by those who were blessed enough to be in her circle of love.

In lieu of flowers, memorial contributions may be made in her name to First Church of the Nazarene Tusouge Ministries and may be sent in care of Rumsey-Yost Funeral Home.

I knew Helen from Hallmark. She was a remarkable woman who could always make you laugh. A very sweet lady.
She will be missed.

My thoughts and prayers go out to the Hess Family, I first met Helen back in the late 60’s used to run around with Dale & Larry and worked with Ab many years at Lawrence Paper Company.

Dear Hess Family, Helen was a joy. She always had a smile and kind words of wisdom, and a chuckle. I know how much she loved and was loved. Heaven gained an angel!

Worked with Helen at Hallmark for years….Condolences to all..

My deepest sympathy to Albert and his family, who were our Nieder Acres neighbors for 27 years. Helen was a great neighbor who always wore a smile.

Thoughts and prayers go out to the family. I remember eating lunch at her and Albert’s house with Dale and his wife. She was very nice and sweet. May her memories comfort you during this difficult times.

Helen was a great lady and hard working employee at Hallmark. Prayers and condolences to the family.