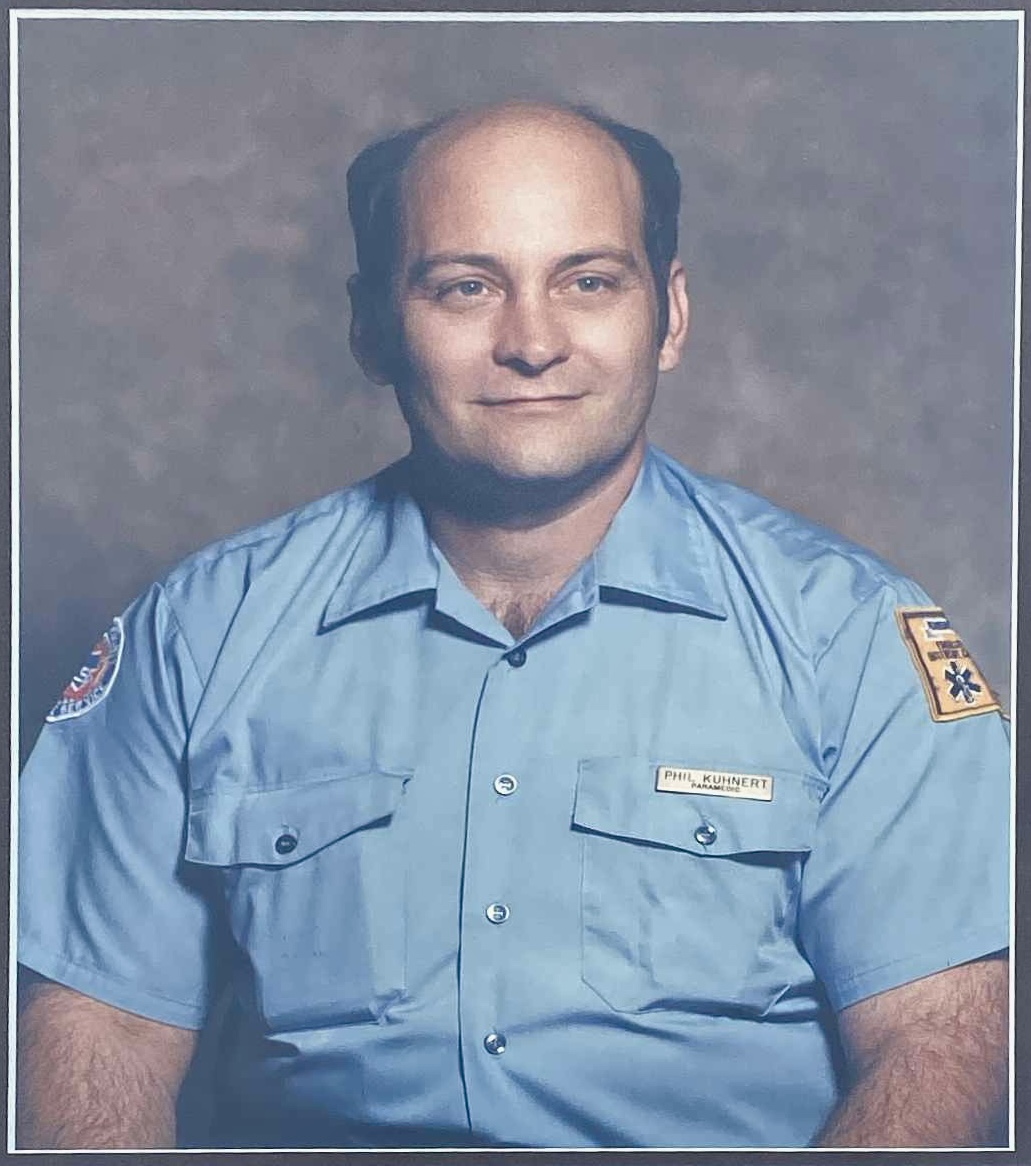 Philip Kent Kuhnert passed away surrounded by family at home on January 11, 2022. He was born on March 20, 1952 in St. Joseph, Missouri and was the oldest of five children of Arthur L. and Darlien (McNett) Kuhnert.

He grew up in Atchison, Kansas. He was a man of many talents. After high school, Phil began the first of his many careers—upholsterer and first-responder in Sabetha, Kansas then Franklin County, Kansas. Phil received his EMICT from Johnson County Community College in 1983. He went on to actively serve for Douglas County Ambulance Service then served as Captain for Lawrence Fire and Medical. He not only was a paramedic; he was a business man where he owned Phil’s Upholstery and Trim for ten years. His distinguished medical and fire career encompassed over 30 years where he received numerous awards. Phil retired in 2007. However, in retirement, he decided to go back to work. He worked for Douglas County Sheriff’s office as a lobby/registration officer, foster-parent for KVC Kansas, classroom volunteer for Pinckney and Deerfield Elementary Schools, and was Santa Claus at Lawrence area shelters.

Phil met Brenda in 1983. Between them they raised seven children. Although times were tough, they made sure everyone had what they needed. Family was his priority and he made sure to do something special for each and every one of his children, grandchildren, and great-grandchildren; whether it was buying someone a special candy they loved, making holiday treats for the classrooms, or taking time out of his busy day to help take care of them when they needed him. He always went above and beyond for the holidays; making cookies and his famous beef jerky, taking meals to work so his co-workers could enjoy a nice dinner, and getting items for families in need, including adopting families at Christmastime and throughout the year.

Family will receive well-wishers on Monday, January 17, 2022 starting at 1:00 pm followed by a Celebration of Life Service at 2:00 pm at Rumsey-Yost Funeral Home, 601 Indiana, Lawrence, Kansas 66044. Inurnment will be held at a later time. In lieu of flowers, memorial contributions can be made to Visiting Nurses’ Association and/or the McSwain Foundation.

Phil was such a kind and caring man. I am glad to have known him. My condolences to his family.

I was very saddened to hear of Phil’s passing. I’ve been friends with David, Brandy and Jessica for many years. All my love and prayers go out to the family.

I met Phil during my EMT training. He was such a great guy. Condolences to his wife and family. I know he will be greatly missed.

Remembering Papa Phil’s generosity, caring, and kindness with gratitude. My sympathy goes out to his family. I know he will be greatly missed.

Dear Family of Phil. Phil was one of my hero’s that I looked up to. I remember his smile. I remember how he greeted me each time I came to the station. He always had a smile on his face. He hired me to work a couple times at the upholstery shop a couple times and gave me my first Nursing Medication Dictionary. Thank you for sharing him with a community that needed people like him. Thank you

Rest my brother, I will always love you along with your famity

Phil left a legacy of being a caring and dedicated person to those he interacted with.
Thanks for the delicious jerky and candy you had for us while on “the-job”.

Phil was one of a kind. His presence on scene was one of compassion and great talent, off scene he was jovial and kind. Heaven is a better place. Sympathies to his family and friends.

My thoughts and prayers are with all of you during this time. I met Phil at a turning point in my life, such a great mentor he was. Though it was a part time job, Phil took me in as an employee and as part of his family and taught me so much. Years and years have passed but any time I had a chance to see Phil that bond was still there. Such a great loss.

Pinckney School is saddened for the lost of our Dear Papa Phil. He has played an instrumental part in supporting our students, staff, and families in so many creative ways! We looked forward to see him in the building and having a wonderful conversation about his life and his grandchildren. Lots of love and lots of laughter.
We appreciate everything that Papa Phil has done for our Pinckney community and we send our condolences to his family at this time!
Much Love, Pinckney Schools

From Anthony and Judy Goetting...

I always enjoyed working with Phil and knew when he was on the scene the patient was always well cared for.Such a giving person !
Dr Goetting

I was so sorry to learn that Phil had passed. Even though we lost touch over the years, our families were close when we were young and I have so many memories of him as we were growing up and starting out on our own. My condolences to the family. Rest in peace, cousin.

Phil was a great guy and mentor , I learned a lot from him. He will be missed . My condolences to the family .

From Mike and Cindy Well...

Brenda and family
So sorry for your loss Phil was such a great person. His goodness will live on within your family. We are lucky to have known Phil!

I loved my dad, and appreciate him being there for me though my life. I will be happy when I see him again in paradise. As psalms 37:29 says. Revelations 21:3-4 this is a promise that jehovah god has given us for the future that is yet to be Fulfilled. I love you all. Matthew 1st born

Brenda I am so sorry for your loss. Both you and Phil made by day many times throughout the years we all worked at the Hosptal.

Jamie and family. I am so sorry for your loss. He was a great man. Jamie stay strong call me anytime. Love you.

My heart goes out to the family. We had an awesome childhood growing up, so many wonderful memories. RIP cousin, Phil.
Nancy (Kuhnert) & Jim Woods

Thank you for all of your years of service to the community. You will be missed by many.

Phil will live In our hearts forever, he was a wonderful man and a super Grandfather, our Condolences to Brenda and the family, we love you Phil until we meet again

Uncle Phil I love you and will miss you. You was a one of a kind,When mom passed you and Aunt Brenda was there making food for the whole clan you did my bubba’s senior pictures and saved us a ton of money, you was always there for no matter what was going on, When mom passed you help us kids love you and will miss you so much, prayers for Aunt Brenda and the kids love you so much rest in paradise Uncle Phil.

I will always remember the many times took my dad to the hospital. In the last year of his life. In one trip he had to transported to a Kansas city hospital. Phil let me ride me up front in the ambulance. I will never forget his compassion he gave me and my dad.

So sorry for your loss. Phil was a great guy and always had a great laugh. My sympathies to Brenda and the family.

Brenda, I’m so very sorry about Phil’s passing. We first met when you had the upholstery shop. He was a great man.

Rode with Phil on numerous calls, taught me tricks from the “old school”, was there when I delivered my first baby. Rest In Peace Brother. To his family, sorry for your loss, Phil will still be remembered and thought about. No one is gone as long as their names and memories are still being spoke about.

From Brian and Joni Lawrence...

Wow what a loss. Phil was the hardest working person I know. He could never say NO. I had a lot or respect for him. Enjoyed working with him and he my job much easier. I am very sorry for your loss

Brenda, Critter and family – I am so sorry to hear of Phil’s passing. My heart aches for you. I will keep you in my prayers during this time of grief. Big hugs to you all!

Enjoyed working with Phil and have many great memories of our interactions. He was always considerate and dedicated to whatever he put his mind to. I will miss him.

Phil was a kind and considerate person. I enjoyed working with him and was always impressed with Phil’s work ethic. My condolences for your loss of such a great guy.

From my family to yours we send our condolences. Phil was a good friend and coworker. He will be missed

From Doug and Edie Klingler...

We are so very sorry for your loss. He was a wonderful man and will be greatly missed. May his memory be a blessing.

So very sorry to hear of Phil’s passing. I know he will be sorely missed. My Sympathy to the family.

I am so very sorry to hear of this loss. My sympathy and love to all of the family. Phil, you were truly one of a kind. xoxo

Phil was a wonderful person and mentor. I am so sorry for your loss.

I love you poppy bunches and more🤍

We are so sorry for your loss of a special man to so many people!He indeed was a special nephew for us. We loved him dearly. Sincere sympathy to all his family. Uncle Harold and Aunt Janice.

I am so very sorry for the loss of this great man. My heart goes out to all of Mr. Kuhnert’s Family and Friends. I will always remember his kind heart and spirit.