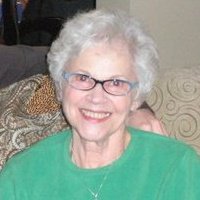 Sherry was born April 19th, 1939, in Pittsburg, Kansas, to Leonard and Edith Swearngin. She met her high school sweetheart, Walter (Wally) McBride while attending College High School in Bartlesville, Oklahoma. They both attended Oklahoma State University and were married upon Wally’s graduation.

Sherry and Wally lived all over the country, initially due to Wally’s career in the United States Marine Corps and then his career with Phillips Petroleum. They ultimately landed in Lawrence, Kansas, where they set their roots and Wally went into business with his brother, Bob, at M&M Oil Company.

Sherry had a passion for her relationship with God and was always active in her local church. She spent countless hours in service at Westside Presbyterian Church in Lawrence. She also volunteered at the local hospital. She had a generous and compassionate heart.

Sherry was preceded in death by her mother and father, husband and sister, Susanna Griffin.

-Son, Kurt McBride and wife Dionne of Round Rock, Texas.

-Many other nieces, nephews, cousins, family and friends.

While we mourn the loss of Sherry, we know that she loved Jesus and that we will see her again because of our confidence in our Lord and Savior.

Private services and burial will be held in Lawrence, Kansas. The family requests no flowers, instead please make a donation in Sherry’s name to either to Westside Presbyterian Church; 1024 Kasold Drive; Lawrence, KS 66049; or Hansen House; 703 Dye Street; Harlan, IA 51537; note for Building Fund.

From Phil and Marge Hoffman...

Our deepest condolences to your family during this time. Your mother was an amazing woman and she will truly be missed. Phil thought so much of her and Wally.

What a sweet lady. She always had a sweet smile and a kind word when I would see her. Thoughts and prayers to her family