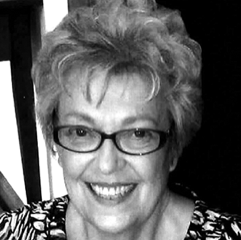 Sue Baur, 78, of Lawrence, KS, died Wednesday, March 23, 2022, at home. She was predeceased by her husband, Doug Baur, and is survived by daughter Cynthia Gibson of Greenville, SC; and daughter Christie Peterson, son-in-law Charles Peterson, and granddaughters Zoe Peterson and Kya Peterson, all of Oskaloosa, KS.

Sue was born October 27, 1943, in Painesville, Ohio, the daughter of Robert (“Bob”) Plummer and Eleanor Semple Plummer, younger sister of John Plummer. The family soon moved to a large farmhouse in the rural township of Perry, Ohio, where Sue attended the Perry public school. The family grew deep roots in the small community (her father was the Lay Pastor at the Episcopalian Church, worked as a State Farm Agent, performed in local amateur and professional theater productions, and received the American Red Cross 10-gallon-hat award, not once but twice! — while Sue’s mother served for many years as the Head Librarian at the small but well-stocked Perry Public Library).

After graduation, Sue ventured off to Allegheny College in Meadville, Pennsylvania. There, in her freshman year, she attended a dance sponsored by one of the school’s fraternities. Exasperated by the shyness of her sorority sisters (as evidenced by their unwillingness to step out onto the dance floor), she elbowed her way to the front of the crowd of women. There she came face to face with a tall good-looking young man who had just done the same thing from the men’s side of the room. Two years later they were married, and Sue dropped out of Allegheny to support Doug while he attended law school at the University of Pittsburgh, courtesy of the United States Air Force. She took a secretarial job with Dr. James Kehl (currently of Sewickley, PA), who remained a regular correspondent with her for the rest of her life.

Sue gave birth to Cynthia just days after Doug’s graduation from law school, and the small family of three made the first of many moves as Doug made his way up the ranks of the Air Force. Christie was born less than three years later, while they were stationed in Denver, Colorado. Shortly after her birth, Doug was sent to take up a post at Hahn Air Force Base in Germany. Following along behind him with both children in tow (Cynthia barely three years old, Christie still a newborn), Sue boarded a plane and headed off into the unknown.

In Germany the family lived 30 minutes away from the Air Force base, in the picturesque village of Kastelaun. These were challenging times for Sue, who spoke no German and who was isolated from other Americans, alone with two small children for the bulk of each day. Despite the challenges, she managed to make friends in the community, including especially the Glaeser family. (Susanne and Sabine Glaeser, in particular, would become lifelong friends, almost extended members of the family.)

Once the family returned Stateside and the children were in school full time, Sue became restless, and picked up seasonal work preparing tax returns at H&R Block. To her surprise, she loved it, and determined to go back and finish her Bachelor’s degree, majoring in accounting. This was easier said than done, however, due to the family’s continuous relocations (Alabama, Colorado, Virginia, Texas, and Virginia again, in the space of just a few years). Each state she moved to had different prerequisites and requirements for college credits (she wound up eventually studying at least three different state’s in-depth histories!), and despite racking up a ridiculous number of credits, the degree itself was elusive. Finally, after almost 10 years of continuous education, the New York State Board of Regents bestowed upon her a Bachelors of Science, and she began studying in earnest for the Certified Public Accountant exam.

The CPA exam is a doozy, and most people take it multiple times before they manage to pass it. Sue, while mothering two adolescent daughters involved in every sort of extracurricular activity known to teenager, nailed it on the first try, and she was hired to work as a bank auditor for Schreiner, Legge & Company, a tax and accounting firm in Alexandria, Virginia.

Her specialty there was credit unions; the work involved showing up unannounced before the doors opened to conduct a review of the books, and she caught many a culprit in acts of theft or fraud. Her attention to detail was highly respected and she assisted the FBI in several cases, testifying in court about her findings. But the majority of the crimes she identified had been committed by first-time offenders who for one reason or another found themselves between a rock and a hard place, and tempted by their ready access to cash. Many of these folks had planned on replacing the funds before they got caught, but fate (in the form of Auditor Sue) had been against them. While she frowned on any form of cheating or short-cutting, Sue always was able to see the human side of the issue, and she never lost her sense of compassion for people.

Sue and Doug retired in 1997, and moved one last time (or so they thought) to Charlottesville, Virginia, which they used as a base for an active and extremely social retirement. Sue especially had had a real talent for collecting people during their many postings, and she and Doug used their newly purchased state-of-the-art custom-built camper van to visit far-flung family and numerous friends, driving, hiking, kayaking, biking, and camping their way throughout the U.S. (including Alaska) and large parts of Canada. Avid birders, they also spent time in Hawaii, the Galapagos Islands, Ecuador, and Peru, keeping birding “Life Lists” everywhere they went. They also traveled extensively in the British Isles, visiting and exploring with Sue’s English family (her father had emigrated from Britain as a teenager, leaving behind a beloved sister, Joyce, who became an invaluable conduit for keeping in close touch with Sue’s many British cousins).

In Charlottesville, too, they met neighbor Susan, soon to become lovingly known within the family as “Super Aunt Susan,” aka “SAS.” SAS would go on to accompany them on many adventures over the years, and was a great friend to both Sue and Doug.

In 2008, Sue and Doug’s second daughter, Christie, and her husband, Charles, gave birth to their first child, Zoe, and Sue and Doug packed up once again and moved to Lawrence, Kansas, where they became engaged, enthusiastic, and very hands-on grandparents to first Zoe, and then Kya, their dearly beloved grandchildren. (Visiting often from Charlottesville in the years before her untimely death, SAS also acted as an “extra” grandparent to Zoe and Kya.)

Over the next several years Sue was instrumental in helping Christie and Charles launch and then run two separate Lawrence-based businesses, the last of which, Laugh Out Loud Family Zone, became a real community magnet for young families, leading to yet further social connections for Sue.

Throughout their lives, Sue and Doug were always extremely active in the Bridge-playing community, wherever they lived. In Lawrence they played with several local groups, sometimes as many as five days a week, making many dear friends, and they both served in leadership positions at the Lawrence Bridge Club.

Doug was afflicted with Alzheimer’s in his last years (as Sue’s father, coincidentally, had also been), and died in May of 2021. Sue mourned the loss of the man she called her “best friend,” while simultaneously struggling with her own awful illness, a condition known as “CBD,” or Corticobasal Degeneration. As her condition worsened, her desire to cling to life waned. Her final days were spent with her daughters, granddaughters, son-in-law, and many other caregivers (with thanks to Home Instead and Midland Hospice) never far from her side, and she died in her sleep with her daughter Christie in attendance.

No funeral services are planned. The family is pleased that Sue was accepted into the “Body to Science” program at Kansas University Medical School. They are thrilled that Sue will continue to do good in the world after death, just as she always strived for, in life. Per Sue’s wishes, there will be a headstone in her name in the Baur family plot at the Erie Cemetery in Erie, PA.

Meanwhile, the family requests that no flowers be sent, but, because Sue and Doug have contributed to, and cared about, numerous charities over the years, making a donation to a charity of your choosing would be appreciated by them both. (A donation to the Alzheimer’s Association [https://www.alz.org/], CurePSP [https://www.psp.org/], or Compassionandchoices.org [https://compassionandchoices.org/] is certainly also an appropriate option.)

Sue loved Solitaire and Sudoku and table puzzles and tax returns. She loved watching the birds at the backyard feeder (though she often rooted for the squirrels to win!). She loved her daughters, her nephews Mark and Jimmy, and their families, especially Susan, Shelley, and Jake. She loved her son in law, Charles, and her dear friend SAS. She loved and appreciated the many friends and extended family who stayed in touch until the end (and we, her family, thank all of you). And most especially, Sue loved her granddaughters, Zoe and Kya. She will be missed.

I first met Sue when Doug and I were fellow “Jags” in Denver, CO. After going our separate ways, we reconnected in the Washington D.C. area. And, oh, did we play bridge, always Sue and Doug versus Terry (my late wife) and me. I recollect Doug keeping a “life-time” score, and the difference after a couple of hundred rubbers over many years was something like 50 points. Talk about being evenly matched! We also enjoyed visiting them in Charlottesville after they relocated. Over the years we enjoyed their colorful stories of adventures in Germany and Great Britain, and especially those about the camper trips throughout the country. Sue was (justifiably) proud of her daughters and their accomplishments. She was one of the smartest people I’ve ever known. Sue (and Doug) will be missed. My heart goes out to Christie, Cynthia, and the entire family.

Your parents were great fun and we enjoyed playing bridge together for many years. Doug always called Sue his bride for most of those years. He loved being born on Groundhog Day. We continue to miss them.

From Richard A. Levick...

Sue and Doug were lifelong dear friends. We mourned Doug’s passing and now we mourn Sue’s. We shared so many experiences and though ours visits were not as often as we wished, we made up with quality for what was lacking in quantity. We felt each other’s love. Their memories will not be forgotten.

Sue and Doug welcomed many people into their lives and homes. I feel so fortunate to have known them and their wonderful family. Sue’s enjoyment of the places she was planted made an impression on me with gentle touches of home ranging from her amazing German potato salad to the special backyard bird retreat in Charlottesville, and the ubiquitous traveling camper. I am forever grateful for all Doug and Sue each gave to the world and—most especially—to me personally. They will be forever missed.