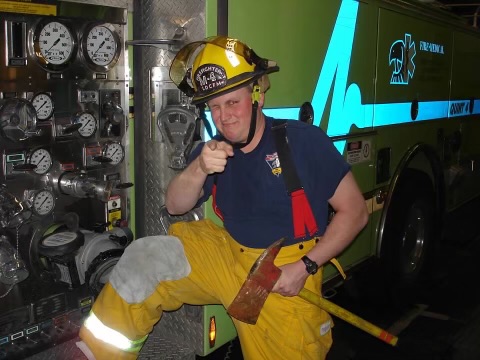 Chad died May 28, 2022, at his home, following a long and courageous battle with cancer.

The Chad was born on June 12, 1974 in Dodge City, Kansas. He moved to Lawrence in 1979. He attended Broken Arrow, Deerfield, West Jr. High and Lawrence High School. After high school Chad joined the Army National Guard and finished his education with a bachelor’s degree in business from Washburn University in May of 2000. Chad later served with the Airforce Reserves Fire Protection Unit and volunteered in 2008 for a tour in Kuwait.

On May 30, 1998 Chad married Candy Ann Johnson in the South Park gazebo. On November 6th, 2001 their daughter, Payton Brooke Gunderson, joined the couple and made them a family of three. They survive of the home.

2001 was also the year Chad joined the recruiting class for Lawrence Douglas County Fire and Medical. His 19-year career concluded when he took a medical retirement in January of 2021.

The family suggests memorials to Answering the Call at ATC911.com This charitable organization serves first responders and their families.

Following the Services on Friday, the family would like to invite everyone to join them to celebrate The Chad at Johnny’s North Upstairs.

Dear Carol, I met Chad (so good lookin) when he and his truck responded to a call I made for help. I saw his name tag after the brief emergency and thought I wonder could this be….so I said I had cool neighbor once whose daughter Erica I baby sat in high school had a boy and named him Chad, before I could finish his face lit up with such love and pride “that’s my mom” ! No doubt that was your baby! Love to you and yours Carol, The Lister family

I will miss your quick wit Chad.

Condolences to all your family.

So sorry for your family’s loss. Prayers

Carol, I’m giving you a big virtual hug. Holding you close in my thoughts.

From Doug and Sally Burger...

Carol, Doug and I send our sincere condolences at the loss of your son. Chad. I wish there was more we could say or do to lesson your pain during this difficult journey. Our prayers are with you. With love.

Carol, I can’t imagine your sorrow. Chad was such a great boy and man. He will be missed by many. My thoughts and prayers go out to you and your family.

I am so very sorry to hear of your loss. Chad and I worked together at station two for several years. He was a great paramedic and firefighter. My thoughts and prayers are with you and your family.

I send you all my deepest and most sincere condolences. Chad had crossed paths with so many people and made friends with most all of them. He would never turn an eye when it came to help someone in need. That was the gentleman, friend, co-worker and stranger he was.
May GOD Bless you all and may HIS Grace help you turn sadness into fond, and heartfelt memories.

My sincere condolences to carol, kaleb and kate