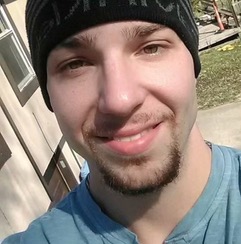 Sean Mitchell Landreth, 30, passed away on June 8, 2022, from an accidental drug overdose believed to be Fentanyl. During his life, Sean was a loving son, brother, partner, and friend.

Sean was born on August 23, 1991, in Merriam, Kansas. Growing up, Sean had a strong aptitude for sports. He particularly loved playing baseball, football, and golf. He was a gifted artist and had a talent for making others laugh. He was known for his contagious smile and laughter that could fill a room. Sean had a harder life than most, but he always insisted that it was “better than some, worse than others”. Sean’s memory will forever be a part of the mind’s and lives of those he loved and that loved him.

Brand and Elizabeth, I am so sorry to hear about your brother! I’m keeping your family in my thoughts and prayers!

Robin & Craig, I’m so very sorry to hear about Sean. My thoughts & prayers are with you two as God comforts , hugs to both of you…..

I am so sorry to hear of this. My thoughts and prayers for Robin and family.

Sean left a brand on my heart and soul. Even through the obstacles that he faced, he was always genuine and lovable. I will never forget how much joy he brought to mine and the lives of others. He will truly be missed. To his family and close ones may your hearts be healed, and your sorrows be lifted. His passing is to soon, but the memory of him will live on forever.

Robin and Craig, we are so sorry to receive the news of Sean’s passing. Our hearts are broken for you and all that knew and loved him.

I remember Robin and Mitch and little Sean in the old days. Studying recent photos of Sean’s face, I can see the reflection of my two good-looking old friends. Reading comments from Sean’s friends, it’s clear that he was kind to them, funny and clever, and beloved. My heart breaks for his mother and the rest of his family, his girlfriend, and his friends. I also feel angry and scared about the toll fentanyl is taking in our community. It’s just so &?$)@# sad. Wishing Sean’s friends and family peace and long, healthy lives.

Sean and Anessea had spent several weeks out at my house just before he passed. My family now is caring for Gordo his two year old pitbull whom is full of life and love. I feel blessed to have had the time I did with Sean. I had pleaded with him to please be smart in his addiction and I feared we would lose him. He was forever talking talking and it always made me laugh inside especially when I’d say Sean jeez my friend I can’t keep up. I’ve known Sean for ten yrs he knows my family and I loved him dearly. He will be missed my heart is heavy and my love goes out to the immediate family. Part of me is so angry to lose another dear friend but overall I am sucum with sadness, I’m tiered of young people dying. I’m sure you are up in heaven talking talking to Maverick all the things you wanted to share with him in life. We love you Sean.

My condolences to the both of you and the rest of the family I’m so sorry for your loss. I was pretty close to Sean after my husband passed away this last June me and Sean had hung out more than the passing bys here and there. When I needed help he was there as I was for him at times. And you are absolute right that smile and laugh was so contagious would bring anyone right out of the dumps even though I knew but most didn’t realize the fasad and all his demons he fought everyday as long as he made someone else he cared for or even barely knew as long as he could see the happiness he brought at that moment he was all good with life for the time being. Again I’m so so sorry for your loss I can imagine losing a child this way but I know the feeling of losing a child and not being able to see them. We love you Sean and may you rest in piece

Robin and Craig, I am so sorry to hear about this. Please know that you are in my prayers.

How sad is this news! Craig, Robin, Elizabeth, Brand, and Jess. I will always remember the Sean that would come by and play kickball dodgeball and all the other activities we would have going on in our backyard. Sean had the fire to win at all cost! Yet when I would take or pick up him from school he was almost always quiet and reserved, saving up for playtime! You all have my deepest condolences!

My heart is breaking for you all. I have some great memories with Sean that I will cherish. *sending virtual hugs*

From Mike and Andrea Parkison...

Robin, please know that we loved Sean dearly and am heartbroken. We’ll always be here for you.

Robin and Craig, so sorry to hear this. Our condolences.

Such sad news. Please accept my sympathies. Dan’s, too. So many memories of times spent together.

Robin and Craig, so sorry to hear of Sean’s passing. I will always remember him as the mischievous, sweet boy that I gave rides to elementary school. My heart goes out to you and your family.

I am so sorry to hear of Sean’s untimely passing and can’t imagine how painful this must be for you. My heart hurts for you, Robin, and your family.

So sorry to hear of Sean’s passing. He was deep down a good kid/young man. My thoughts to Mitch, Robin & Craig during this time of sadness.

Robin and Craig I am so sorry that this has come to you. My prayers are with you and my heart hurts with you.