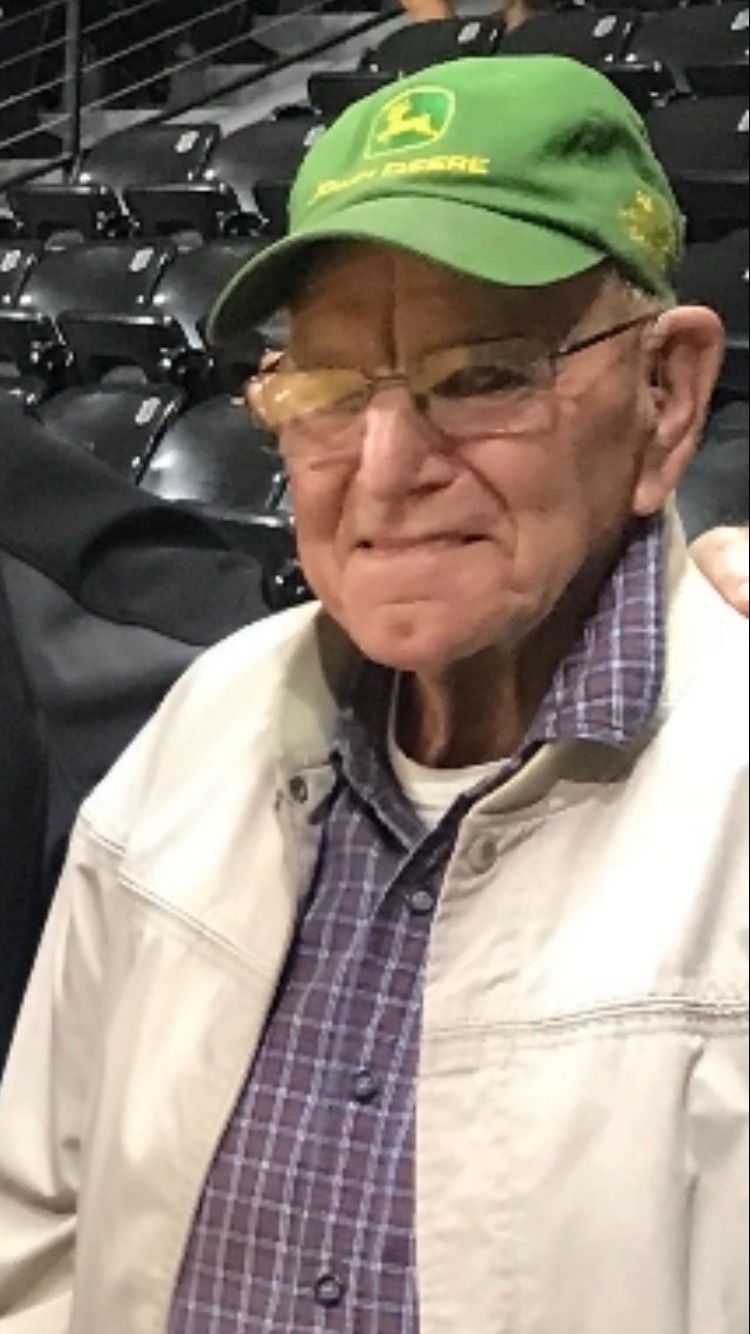 Lloyd was born in the rural Baldwin area on May 7, 1927, to Jesse and Elsie Elizabeth (Peterson) Wingert. He was the fourth of nine children. He married Doris Cox on April 29, 1951, at the home of Doris’ parents.

Lloyd retired from FMC in 1992 after 28 years of service. Prior to that, he worked at the McConnell Machinery and Lawrence Asphalt. Throughout his life, Lloyd also farmed in rural Douglas County. After retirement, Lloyd worked summers for the Wakarusa Township Road Crew when needed.

He was happiest when helping others. Lloyd loved working in his shop and not only repaired tractors, lawnmowers, chainsaws, etc., but also built trailers, log splitters, box blades, etc. Welding was one of his talents that he spent many years doing. There were many times when pieces of machinery needed repair but were so old there would be no parts available. So, Lloyd made the part needed to fix the machinery. Neighbors knew Lloyd’s shop was usually open and he was available to fix what they needed, when they needed it!

Lloyd was very devoted to his family, and they brought him great joy. He never missed the chance to watch baseball, softball, and volleyball games whenever his kids or grandkids had games. He continued to enjoy watching his two great-grandsons when they started playing ball. He was not just interested in sports, but in anything they did!

He was preceded in death by his wife, Doris, his parents, and brothers: Leo, Merle, Gene, Clarence, Jimmy and Alfred and a son-in-law, Jeff Miller..

To Janice & family
I am saddened to hear of the passing of Lloyd, such a great man! I wish I could have been able to attend his funeral. Lloyd was always so kind and helpful to me over the 40 years I had known him. He helped me get my first Allis Chalmers tracktor up and running and always had enough fire wood to keep me warm in the winter.
He will be deeply missed! Prayers to your family.

Janice, Larry and rest of family, I just got back in town and found out about Lloyd, so sorry for your loss, I worked with Lloyd at FMC for many years, he was a great friend and co-worker. My prayers and thoughts are with you.

Janice I’m so so sorry we missed it! It wasn’t for the lack of trying. When you said Pleasant Grove Cemetery I just assumed that’s where it was. Of course I didn’t think to check the obituary where it said Clinton Lake Cemetery! I’m so sorry I wasn’t more prepared. I wanted to see you and everyone else. I don’t want the rest of the family to think I didn’t care enough to show up! That’s not the case at all! I hope to talk to you tonight! Love you and Uncle Lloyd!

From Darrell and Debbie Huff...

Welcome home “daddy”
Lloyd! I know that was Doris’s first words! He was such a wonderful man and always helping out with an outstretched hand and heart! Our hearts and prayers are with you Janice and Larry and your family and may you find peace and comfort in the memories you hold dear to your heart ❤️!!

Janice, Nancy and I are sorry for your loss. Lloyd was such a help to me when we first moved in to be your neighbor. He disced my weeds, and was always good to answer questions. One of our fondest memories is watching Kyle and Emily feed our catfish and and Rocky. Our prayers are with you and yours.

Larry so sorry for your loss. Your family will be in our prayers.

From Bert and Marge Rowell...

Lloyd is so sadly missed in the neighborhood. He was the best neighbor anyone could wish for. He would do anything for you and more, often without ever being asked. But don’t ask to BORROW anything from him. Like the wise man he was, he knew that tools borrowed developed their own walking legs! Janice and Larry our thoughts and prayers are with you. May all the happy memories last for ever. Your Dad will never be forgotten.

What a beautifully said testimony for Uncle Lloyd. Peace to him, and wishes for comfort to his family.

Janice and Family
So sorry to hear about Lloyds passing he was such a wonderful person always willing to help others he will be greatly missed.

From Mick and Linda Allen...

Janice and Larry- Your dad was such a wonderful man and so capable of doing everything. He took such good care of us over our many years in the neighborhood. Lloyd took great pride in his lovely family. Our deepest sympathy.

Larry and Janice.. my prayers r with you and your family…he was a great man🙏🙏🙏🙏

Sending prayers to the family for comfort during this difficult time. What a special legacy Lloyd left to his children and grandchildren. Much love to you all.

From John and Joyce Dillon...

Janice and Larry,
Sorry to learn about the passing of your DAD. Think of the Wingert Family often.

Janice and Larry,
We are so sorry about Lloyd, he was a wonderful man, always smiling and made you feel like you were special. He was a hardworking man, do anything for you. We will really miss him, the neighborhood will not be the same without him. May the lord bless you all and if we can be of any help, you can count on us.
Love Stan and Marge Waller

So sorry to hear about your loss. Your dad was such a wonderful man and will be greatly missed. He had a long full life and lived for his kids and grandkids. Thoughts and prayers for all of his loving family

I’m SO sorry to hear about Lloyd passing. He was such a great guy and will definitely be missed! Hugs and prayers to his awesome family! Love you all!