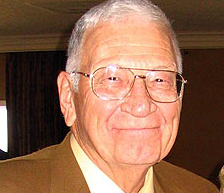 Ray was born in Salina, Kansas, on January 11, 1934, to Teresa and Oscar Wilbur. He was the third of their five sons, which also included Robert, Roy, Richard, and Roger.

After college he served two years in the United States Army and then taught and coached in Goodland and Moundridge, Kansas.

He married Marian Mathews on June 4, 1960. After spending a year in Lincoln, Nebraska, the couple moved to Ohio, where Ray used his National Science Foundation Grant to complete a master’s degree in mathematics at Bowling Green State University.

Upon graduation, Ray and Marian moved to Lawrence, where Ray went on to teach at Lawrence High School for the next thirty years, while also earning his doctorate in math education at the University of Kansas. During his tenure at LHS, the student body voted him Teacher of the Year five times.

After retirement from LHS, Ray volunteer taught at Bishop Seabury Academy. In 2006, Ray was elected to the Kansas Teachers’ Hall of Fame, an honor bestowed on only a few hundred educators in the state’s history.

Ray was a rabid sports fan dedicated to supporting the Chiefs, Royals, and Jayhawks.

Survivors include his wife of sixty-two years, Marian, his two sons and their wives, Mike and Katie of Wilton, Connecticut and Patrick and Candi of Lawrence, his three grandsons, Davis of San Francisco, Jackson of Atlanta, and Weston of New York City, and his brother Richard, and wife Jody, of Colorado Springs.

Memorial contributions may be made to Trinity Episcopal Church, Trinity Interfaith Food Pantry, Meals on Wheels, and/or Bishop Seabury Academy.

A celebration of life will be held at a date to be announced.

Ray was truly a “teacher”. Got to know him as a person when I coached basketball at LHS in the early 80’s. Ray did the scorebook for every Lions game. Tremendous teacher and person. He will be missed.

I was so sorry to read about Dr. Wilbur. He was a wonderful man and teacher. Marian, I wish you and your family condolences and hope that you find solace in realizing what a great life you made together. Marie

From R.W. and Betty Scribner...

Dear Marian, Patrick, and Mike,
We are so saddened. Please accept our deepest sympathy. We have been privileged to be your neighbor for 40 years. Ray will always be remembered for his kindness and willingness to give extra time to guide our daughter and, later, our grandson through the process of solving math problems. So many special memories of such a wonderful man. Prayers for all of you.

He was excellent to learn from, a great role model, and great to teach with. I am much better for having had the opportunity to learn from Ray and teach with him.

I had both Dr. Wilbur and his wife as teachers in the Lawrence Public School system, lived down the street from them and even delivered their newspaper for a few years. My every interaction with them in every area was positive and kind. My deepest condolences to Mrs. Wilbur and the rest of the family for their loss and to everyone who knew him for their loss as well.

I share the same sentiments as so many others. Dr. Wilbur taught my Calculus class in 1974-75 and I remember that he was a great teacher but an even better human being. My condolences.

Mr Wilber(he earned his doctorate while I was his student) was my favorite teacher of all. His kindness was unmatched. His teaching seemed effortless, but that’s really the mark of excellence. He got me through Calculus 1 and 2. I still think of him, even though it’s been 48 years since my graduation (1974 for the non-math folks).
🙂 I am so thankful to have had the privilege of being his student in math and life. We have lost a gracious soul.

I was heartsick to read about Dr. Wilbur’s passing. My deepest sympathy to Mrs Wilbur and Family. Dr Wilbur and Mrs. Wilbur meant so much to the four Madsen children. They were the ultimate example of a dedicated and wonderful teacher.

My love of math and undergraduate degree were heavily influenced by Dr. Wilbur. So thankful for all the lives he touched.

He made learning fun. My thoughts are with his family.

My deepest condolences to the Wilbur family, especially to Mrs. Wilbur, my wonderful 9th grade English teacher. I am very sorry to hear of your loss of this amazing individual. I will leave yet another message of what a wonderful Calculus teacher and person Dr. Wilbur was. And his impact and influence on my life was great. He was on the hiring team at LHS that gave me my first math teaching job. I went on to teach 25 years of high school math, including 10 years of Calculus, and so in many ways his teaching continued on to my students. Such a pillar in Lawrence’s education system and a dear man. I know he will be missed by many.

From Al and Kathy Gyles...

What sad news to receive from our daughter. Ray made us so at home when we moved to Lawrence to teach back in 1982. Both Ray and Marian were great friends. Sorry we are out of town and will not be back until mid September.

Ray was an excellent teacher but a better man. He will be missed by many.

Marian, I was so sorry to hear of Ray’s passing. Please accept my condolences. We will certainly miss the meal delivery expertise of you and Ray at the Christmas Dinner.

Rest in peace Mr. Wilbur…He was one of the few teachers who got thru to my hard head…

I loved Geometry because of Mr. Wilber. He cared about his students and was a kind and gentle soul. Thank you… RIP

One of the best teachers I ever met. I was definitely one of the people he inspired. Blessings to Mrs. Wilbur and his family.

Dr Wilbur was a wonderful man.. He was a gift to math, his students, LHS. We are all better for having known him. My condolences to the family.

I was fortunate to have known Ray as a teacher, mentor, colleague, and friend. He was the same kind, gentle person whether he was holding a piece of chalk, a baseball scorecard, or a paintbrush. He leaves us all richer for have known him.

Marian and family, Ray exemplified the highest qualities of a teacher through his caring concern that students understand mathematics, a subject that too often evokes anxiety, fear, and avoidance. While serving #497 as mathematics coordinator, I turned to Ray for support, advice, and direction and was offered kind respect and guidance. Marian, you and Ray were the standards for teaching excellence! Thank you for touching the lives of hundreds of students in loving, inspiring ways. May God’s peace and grace surround you. Love and hugs, Mary

He made mathematics beautiful!

Dr. Wilbur was a caring, and compassionate person and an inspiring teacher. Our calculus class absolutely loved him and he put up with all our hijinks. He could explain anything and I loved learning from him. We had so much fun in class, and Dr. Wilbur had a great warmth and sense of humor. Definitely one of the finest people and best teachers I have ever had. The world was a better place for his presence in it.

Condolences to Marian and his family. A great teacher and a fantastic gentleman. He will be missed by many. Larry Hatfield

Mrs. Wilbur, Mike and Pat – my sincere condolences to you and your family. Dr. Wilbur was a great teacher and he inspired so many students. You are all in our hearts. ❤️

I was saddened to learn of Ray’s passing. He was my family‘s neighbor for almost 18 years until we moved. A better man could not be found! My prayers to Marian and the entire family as they face the days ahead without this amazing husband, father, grandfather, teacher and wonderful human being.

Marian Mike. Patrick & family
Please accept Sharon and My sincere condolences for the loss of Ray a husband a father a grandfather an excellent teacher-Coach and an exceptional humanitarian

An amazing teacher. I was lucky enough to have both he and Marian as teachers. Wonder people.

Amazing and inspiring teacher! He was a gift to us at LHS! I always enjoyed seeing him when I could get back to Lawrence! Peace and condolences to the family. ❤️🙏

Dr. Wilbur taught me calculus at LHS, and left such a mark. He was a brilliant teacher, and such a lovely, kind human being.

As a teacher of mathematics, I have tried for 28 years to match the standard of excellence of Dr. Wilbur. He was a superlative teacher and a kind and generous man.

Ray Wilbur was an excellent teacher and caring humanitarian. Two of my children profited from his teaching.

Simply one of the best.