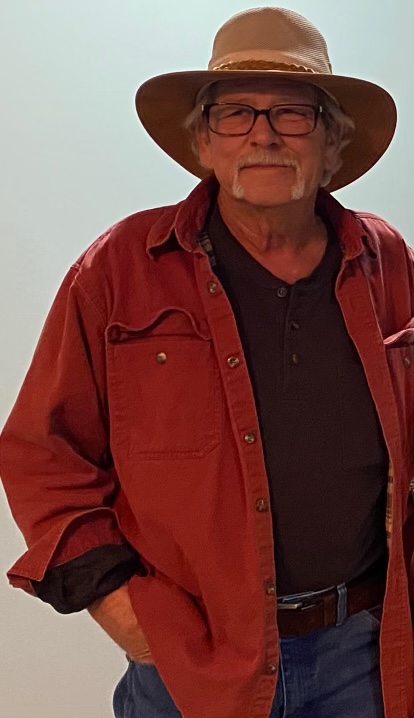 Stephen passed away on Saturday, August 20, 2022, at his Tecumseh, Kansas home with his loving family at his bedside.  He had been battling a long, tough fight with lung cancer since March 2021.

Stephen was born March 28, 1958, in Herrington, KS, son of Jack, and Vivian West.  He graduated from Hillsboro High, in Nashville, Tennessee.  He traveled to many places in his younger years and moved back to his home state of Kansas in the 70’s, before continuing his travels once more.  He married his wife Dorothy in May of 1987 in Arizona.  Together with their children they lived in the Lawrence and Perry Kansas areas for 26 years.  Stephen and Dorothy then moved to Arizona in 2014 for family and work, enjoying the beautiful northern desert for five years.  In 2018 they moved once again to Oklahoma for work and to be closer to their Kansas family.

Stephen was an excellent carpenter craftsman, he spent most of his working years in Lawrence employed by commercial contractor Harris Construction.  He was known for his ability to tackle difficult commercial remodeling jobs which included the restoration of First United Methodist Church in Lawrence, KS and  Midland theater in Kansas City  where he rebuilt the ticket booth.  He also worked on the Hobbs Taylor Lofts project in Lawrence, KS.  He was an asset to his craft and prided himself in “doing it right the first time, and not having to do the work twice”.  He was often consulted on construction projects whether it be at work or by friends/family and always gave his best any place he worked.  He will always be known for his wood working skills and carpenter abilities, as they were a true passion of his.  His hobbies were listening to blues music, hunting, fly fishing and bird watching- he especially loved to watch hummingbirds and always made sure their feeders were full.  He enjoyed grilling and smoking meats and cooking, often making meals from scratch and off the top of his head.  He loved the outdoors and spent most of his time outside tending to his garden and working on various home projects such as  maintaining his vintage Ford tractors.  Stephen is known for keeping his life simple, enjoying family and the company of his beloved Shiba Inu Ringo.  He was one of a kind, loved greatly by his family and will be sorely missed.

Stephen is survived by his wife Dorothy West of 35 years, his daughter Rebecca Bentler (John) of Perry, Kansas, his step-son Dustin Taylor (Marie) of Baldwin, Kansas and his step-daughter Sherrie Kincaid (David) of Lawrence, Kansas.   He has three grandchildren, Joshua Taylor 10, Isaac Taylor 7 and Clarus Kincaid 3.

The family suggests memorial contributions to the Washburn Institute of Technology  in care of Rumsey-Yost Funeral Home, P.O. Box 1260 Lawrence, Kansas 66044,  to help a student in need of assistance with their studies in the Carpentry Program.

Dorothy so sorry to hear about Steve’s passing. Our thoughts and prayers are with you and the kids

From Megan and Jovani Pacheco...

Prayers for all of my family. May he Rest In Peace🙏

Thank you Anna/sis, I am so glad Steve and I were able to spend time with you and Rudy in beautiful Northern Arizona. I will never forget those great times we had with Steve back then.

Thank you Rosie P, and Rose S, Thank you Joe Dave and Sylvia; I miss my husband so much, appreciate the thoughts and prayers it really means a lot to me right now; my family and I are truly suffering a great loss. Praying for peace and healing rightnow. So painful.

God bless you Dorthy, and your family my deepest sympathy , to you all. Sure miss all of you! Your cousin Joe Dave.

My cuzin Dortohy, My Deepest Sympathy to you and your family May God comfort you all through this difficult time 🙏💞 Peace be with you

Cousin Dorothy …My sincerest condolences for the loss of your husband .Prayers going up for you and your family. May he Rest In Peace…..

May you be showered with lots of love from family family Near & never far!…As you walk through this!…siento mucho!
♡♡Tu prima..

Stephen was blessed to have his loved ones around him. His love for all of you kept him going. We will miss him and all he meant to his family and friends. May the Lord strengthen those left behind with love and watch over them, we pray.

Thank you Karl. Steve said you both thought a lot alike and that he enjoyed his friendship and conversations with you. We miss him greatly.

Thank you Martha, we miss him greatly. Dorothy.

I will miss Steve – his energy, tenacity, and integrity.

Thanks Jeri, Les,, and Martha for the kind words and thoughts during this difficult time; the passing of my brother Steve……..Tim

I am saddened to learn of Steve’s passing and so sorry for his family. I wish I could be there with you all.
Love you all,
Jeri and Les

My deepest sympathy to my sister Dorothy and family. May he rest in peace