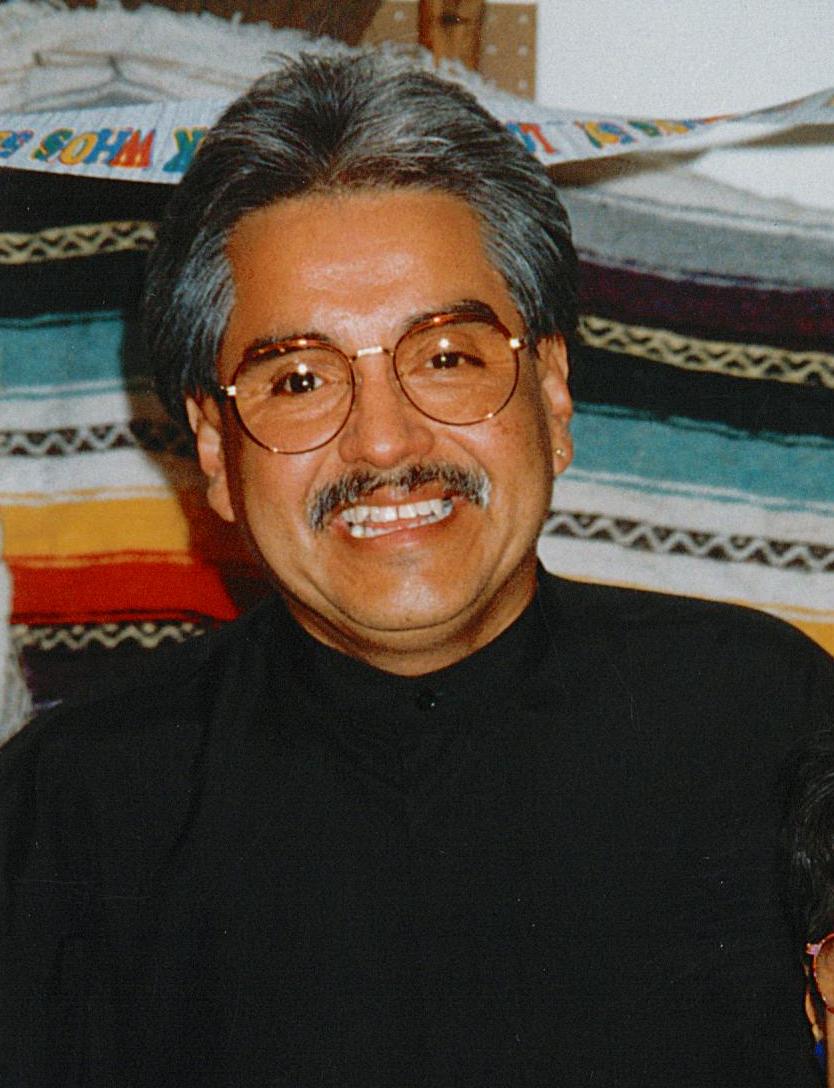 Please join us as we remember Jesse “John” Nunez as it’s been almost 2 years since his passing. He requested his family and friends come together to celebrate his life and party! You’re invited to come to share some of John’s favorite foods, listen to some stellar tunes by The Bonfire Blues Band, share funny & touching memories, and remember a wonderful person who is greatly missed! Let’s toast to Double J!
Thanks, Melinda

Jesse John Nunez, 75, passed away on December 14, 2020 at his home surrounded by his loving family.

He was born March 27, 1945 to Pablo and Mary (Garcia) Nunez. The oldest of six children, John attended Lawrence schools and graduated from Lawrence High School in 1963.

He started his career at Albertson’s Dairy and then later worked for Hallmark Cards as a Large Press Operator, retiring from there in 1999 after 32 years of service. He then went to work for Tom and LuAnn Wilcox at Round Corner Drug where he was treated like family. This was truly his favorite place to work.

John was an avid blues lover and enjoyed listening to live music. The next time you listen to Joe Bonamassa, please remember John. He loved collecting die cast cars, unique knives, and eating any kind of chocolate. But his true love was spending time with his grandchildren and traveling. He was able to enjoy trips to Colorado, northern Arkansas, and the beautiful island of Anna Maria in Florida. John and Melinda renewed their 30th wedding vows on Anna Maria Island in 2012. John was always friendly, helpful, and genuine. He never spoke ill about anyone. John was diagnosed with Parkinson’s disease in 2004 and NEVER complained or gave up.

The family would like to thank Humberto and Pam Pineda, for sharing their beautiful Florida home during John & Melinda’s travels; Mark Barnes, for always being a true friend and being by his side; Dave Drewry, for his kind words during John’s Celebration of Life and all of their wonderful, kind neighbors who proclaimed John the “King of Chalk Hill Court.”

The family appreciates the loving care and support given by the three angels from Elara Caring Hospice.

“Per John’s wishes we will have a big party to celebrate his life at a later date.”

Our dear friend John we will miss you everyday. You have been a treasured friend for years and you have put up with me through thick and thin. Every time I hear that great music you love I will think about you. Dear John we love you. Rest in Pease and I pray we will see you in the next life.

Melinda & family
So sorry for the loss of John he was one of kind! He made you always feel welcome going to miss him! Hugs ♥️♥️♥️♥️

Melinda I am so very sorry I just heard this news today. Please know I love you and I am keeping you in my prayers!

Deepest sympathy to you and your family.

I have been thinking about you all during this difficult time. It goes without saying how much I love John’s family. I will always remember the good times shared in the past. I find comfort knowing John is at peace.
Michele

Yvette & Dianne, I am sorry for your loss. I know how close you were w/your father. I remember years ago when we all got together to see Carlos Santana perform at Sandstone. Boy was it hot out there but it was fun! Your father will always be w/you all because his spirit lives in you. May our loving Lord comfort you all, Melinda, children & grandchildren with His love & strength.

From Susan and John Williams...

Being neighbors just doesn’t describe our friendship. We have had so many wonderful times together and we have enjoyed each and every memory we’ve shared with you and John. Like the driveway parties, our vacation to St Louis, our cruise to the Caribbean, our evenings out for dinner, sharing a pizza together just to visit, sharing weddings of our children together, hovering in your basement during tornado warnings, borrowing tools and lending a helping hand whenever asked. We will miss John’s laughter and his always welcoming smile. Rest In Peace, John and suffer no more.

I am so very very sorry about John’s passing. He was very dear to me, Tom and the Wilcox family. When John was working at Round Corner he so often would come into the pharmacy when it was busy and everyone was stressed and with a couple of sentences would lighten everyones mood and have us all chuckling at something he said or did. He made so many days better with just his presence and lightheartedness. He was great with customers. We would often hear how he had been kind and went the extra mile to deliver medications to the homes of our customers.

One time John loaned Tom a Santana DVD and I bet he and I watched that 50 times. We had to buy our own copy! Many times when someone would come to the house Tom would disappear and come back with the Santana DVD and start playing it for them. He wouldn’t ask them if they wanted to watch it……they were GOING to watch it. Haha!

John was famous for his driveway parties! He loved to get everyone dancing complete with a live band, food, drink and loads of fun. I want to remember him trying to hustle everyone onto the driveway dance floor!

Tom and John both battled Parkinson’s. Their friendship started while working together at Round Corner Drug Store and it continued as they would share their Parkinson’s journey with each other. They were both extremely valiant with their health battles. Neither one of them allowed it to rob them of their fun or good humor. I admired, loved and respected them both greatly for how they lived so bravely with such challenges.

Dance like crazy in heaven John and Tom! You have earned it!

You have been loved deeply and will never be forgotten.

From Eldon and Betty Roecker...

Melinda and family. We want to send our condolences to you and your family. So sorry for your loss. . Eldon and John worked together in large die cut.

Melinda and family I’m so sorry to hear of John’s passing. My thoughts and prayers are with all of you. He left you memories to treasure forever. Hugs Cindy

Melinda, been thinking of you so often. You have so much stress in the last month. Please take care of yourself. Your health and spirit is important. I will visit you later on. Love Pam

So sorry to hear of John’s passing. Prayers for his family. I’m so sorry Dionne about your dad. He was a great man.

Melinda my thoughts and prayers to you and all family, I always enjoyed seeing John at family occasions – peace be with all of you

From Roxanne Van Meter, to Melinda, so sorry for your loss, my thoughts and prayers go out to you and your family.

Melinda, Rick, Dionne., Chris, Yvette and Adrianne-Your California family sends love and prayers for your healing. John was always kind and loving toward us all-He will be missed. We will treasure the memories of our visits in California and Kansas. Much love to you all❤️ Lydia, Nina, Alex, Matt and Evan

Melinda and family…Our thoughts and prayers are with you. John was one of the first people I worked with at Hallmark.

From Jim Garcia and Family...

Melinda and family. We are sorry to hear of your loss, John was a great guy and will be missed. Our Thoughts and Prayers are with you and the family

Melinda, we are so sorry to hear about John. He was a great guy. Hugs and prayers to you and your family.

Melinda-
Im so sorry for your loss. John was such a wonderful man. He was always so kind and helpful to me when I moved into the neighborhood. John and I shared a laugh and smiles in every setting. He was truly a good soul. Having lost my father last year to the same awful disease, I understand too well all the different feelings you must have right now. Please contact me, for anything, in the future. Take solace in the love of your family and friends and take the time you need for yourself. God bless you and Adrianne during these difficult days.

Melinda
So sorry to read this about John.
I always enjoyed working with him
at Hallmark.

My heart breaks. I truly loved that man. I miss so much the times we shared, our “group trips” to KC, eating at Manny’s, the little get togethers at the house, the big parties. My prayers to you Melinda and family, we all lost a helluva guy.

Saddened to hear of Johns passing. I am so sorry Melinda and family for your loss. Always enjoyed working with John.

Sorry for your loss Melinda. John was a great guy.

To all of John’s family, we are devastated by this news. Sending thoughts of love, strength and the gift of joys in the shared memories you have together. As a kid I always felt like I was part of the family when we were kids

Melinda and family.
I am so sorry to hear about John. It truly saddens me to hear of his passing. We were the best of friends back in our younger years. We shared a lot of experiences back then. John will be sadly missed and long remembered for the great guy that he was. Prayers and condolences to you and your family.
Frank and Sharon

Susan and I very sorry to hear about John. Always a gentleman and easy to get along with at Hallmark. I knew John way back when we were both East Lawrence kids on bicycles. Hate to lose old friends. Condolences to Melinda and family.

Melinda, Adrianne and family so sorry to hear this. Fond memories of John at Hallmark… always had a smile or a story. Thoughts and prayers to all.

Melinda and family. I am so sorry for the loss of John. He was a great guy and I enjoyed being his friend. RIP John…